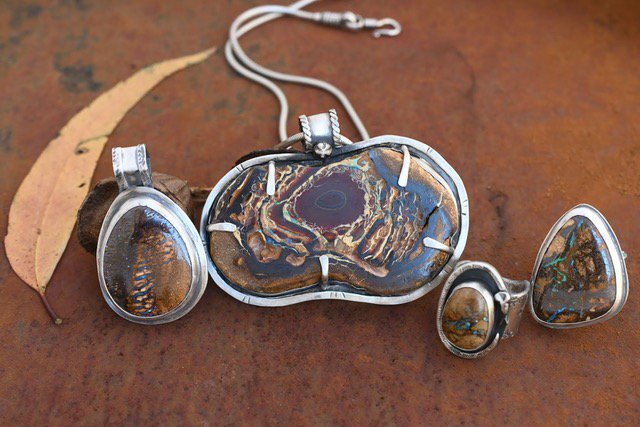 October is Opal Month and the ever colourful Linda Jackson has a stash of stones that she's been making into magical necklaces for the opal tribe at Jewels on Queen - 40 Queen Street, Woollahra. Linda had her first opal jewellery show upstairs in the Queen Street Galleries back in 1981 so it's rather fabulous that she's back in the building with a collection of handcrafted jewels featuring our national gemstone 38 years on!

We're also excited to have young Bundjalung jeweller Lydia Baker onboard, alongside Cybele from Wabisabi Opals, Sky Mazurkiewicz from Charleys Forest Silver, Sheridan Kennedy from the Queensland opal town of Winton, Sky Bragg from out near Lightning Ridge, and award winning opal designer Miro Schultz from The Underground Movement.

All these fabulous jewellers will have their work on display for Opal Fever from Tuesday October 1.

And because the only cure for Opal Fever is more opals, we'll be hosting opal appreciation groups with some of our designers to delve deeper into the mysteries of these alluring desert gems. In these workshops you'll have the opportunity to make your own jewellery with boulder opal beads and other special charms or get customised pieces made with the opal of your dreams.